Six researchers from the Clodomiro Picado Institute (ICP), of the University of Costa Rica, and one from Mexico received the 2017 Girolami Family Award for an international biomedical research on antiophidic serum. 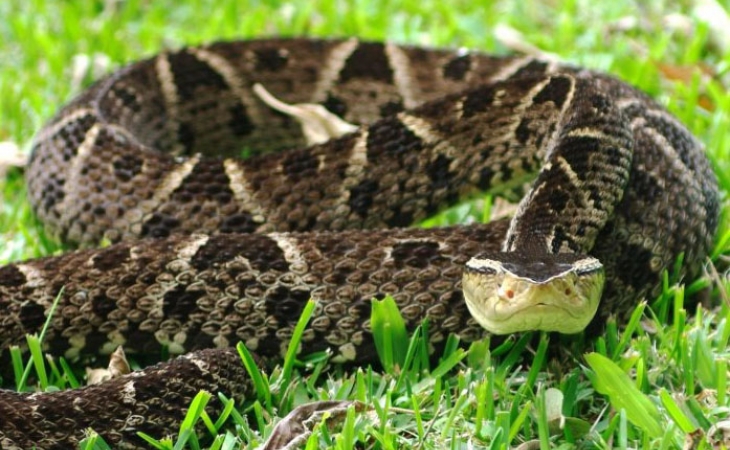 The fer-de-lance viper (Bothrops asper), is the poisonous snake that causes the most bites in our country. The antiophidic serum evaluated in this research is not effective to combat all of the effects of his poison.

The recognition was granted by the journal Revista de Biología Tropical (RBT), and International Journal on Tropical Biology and Conservation, through the publication of the article "Effectiveness of a polyspecific antivenom produced in Mexico to neutralize, at the preclinical level, toxic activities of venoms of Bothrops sp (Snakes: Viperidae) of medical importance."

The award-winning research consisted of evaluating whether an antiophidic serum produced by Birmex Laboratories for snakes in Mexico was effective in neutralizing poisons from some of the snakes that cause more ophidic accidents in Latin American countries. In the case of Costa Rica, effectiveness was evaluated against the venom of the fer-de-lance viper (Bothrops asper), which causes the most bites in the country.

According to Dr. José María Gutiérrez-Gutiérrez, member of the research team, antiophidic serums are produced for certain snake venoms and can neutralize poisons from different origins and regions.

That is why it is very important to know which snake poisons are neutralized by antiophidic serums. “At the ICP, we have analyzed the antiophidic serums for Costa Rica, but we also do studies for serums from other countries.”

"This project in particular is a line of collaboration with Birmex Laboratories from Mexico; with them we have an academic alliance to carry out joint research.”

“In this particular study, what we did was to take an antiophidic serum that Birmex Labs produces, a polyvalent serum, and we evaluated its ability to neutralize snake venom from several countries in Latin America (Colombia, Peru, Bolivia, Brazil, and Costa Rica).”

“Here the question that concerns us was to know if the serum produced by Birmex Labs was effective in neutralizing poisons from the snakes that cause the greatest number of bites in Latin America,” said Dr. Gutiérrez.

The expert explained that after a year of work, researchers concluded that the serum produced by Birmex Laboratories is effective against several poisons of some snake species of South America. However, it is partially effective against the Costa Rican fer-de-lance viper, since it does not neutralize the effects that alter blood coagulation.

Dr. Gutiérrez explained that it is very important to know which serums work in which countries with a scientific basis, because this allows decision-makers to acquire them or not, and on the other hand, it is very important because it feeds the collaboration networks that the ICP has at the international level.

He explained that this collaboration with Birmex Labs is strategic for ICP, because they both have common interests. In the past, they have evaluated antiophidic serums produced in Costa Rica. “We are encouraging researchers, technicians and research projects exchanges,” he added.

He recalled that currently the World Health Organization (WHO) demands that to acquire antiophidic serums in a country, its effectiveness to neutralize the venoms of snakes in that country must previously be proven.

For example, the serum produced by Birmex Labs and evaluated by the ICP cannot be marketed in our country to be used against the fer-de-lance viper venom.

According to Dr. José María Gutiérrez, in Costa Rica there are approximately 600 snakebites a year, most of them caused by the fer-de-lance pit viper, and 4000 in Central America.

Dr. Julian Monge-Najera, director of the International Journal of Tropical Biology and Conservation, stated that the Clodomiro Picado Institute provides antivenom serums to tropical regions where large companies have little interest in participating.

Currently, ICP exports antiophidic serums to all Central American countries, Ecuador, Colombia, and Peru; and in Africa to the Federal Republic of Nigeria, Burkina Faso, the Republic of Mali, and the Republic of Benin.

According to Dr. Nájera, this is accomplished by the staff at the Institute, not only with the highest technological level and quality standards, but at prices appropriate to the conditions of these markets in developing countries.

“The complexity of the poisons is very high and not all the serums have the same effectiveness in all places. It is necessary to make local assessments and adjustments to achieve the best and fastest recovery for patients.”

“The award was granted to a work that precisely addresses this problem with a high level of scientific quality,” said the academic.

The Girolami Family Prize is awarded annually to the best biomedical publication in the Journal. The winners received a certificate and $ 2000 USD dollars.

In accordance with the rules of the Prize, all Costa Rican authors of biomedical articles published in the Journal are considered participants automatically, no application is required.

The Girolami Family Prize was established in 1995 by Dr. Ettore De Girolami and his family. Dr. De Girolami, who died in 2006, was an Italian cytologist and pathologist who lived in Costa Rica from 1952 to 1958.

The identity of the judges remains anonymous, but they are designated by the Schools of Medicine, Pharmacy and Microbiology, as well as the School of Biology at the University of Costa Rica. On this occasion, the Jury was assigned to evaluate 30 works published in a period of two years.

Asked how they received the recognition, Dr. Gutiérrez, on behalf of the research team, said that for the people who participated in the study and for the Institute in general, the recognition is a great encouragement.

"For us it is very important, seeing as how the Journal Tropical Biology is quite emblematic at UCR. This is one of the best journals of the Institution. It is a historical magazine and many of us have built our first weapons in the scientific publication in this journal founded by Dr. Alfonso Trejos- Willis (1921-1988), a mentor for us.

“It is a Journal that has a very important significance for UCR and for the scientific community in the country. For us to receive recognition from this magazine has an affective element also for what it represents and for being from our own University,” said Dr. Gutiérrez. 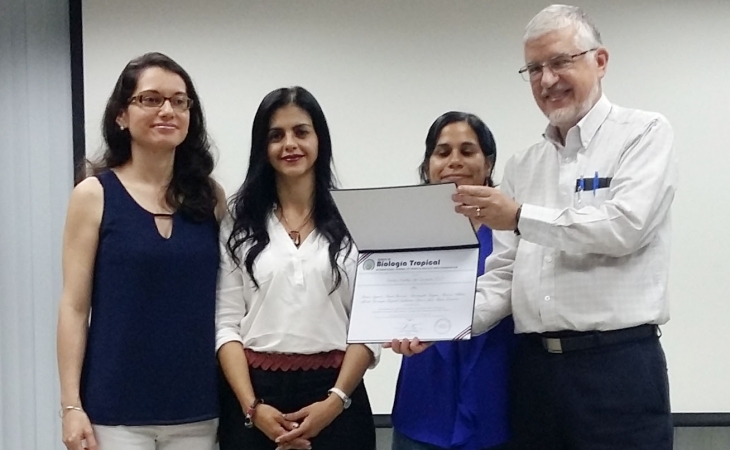 Part of the research team received the Award last September 8th, 2017 at the Activity Hall N° 1 of the Carlos Monge-Alfaro Library.