The University of Costa Rica (UCR) was visited by leading researchers from different continents, specialists in historical writings on travel, expeditions, and shipwrecks, which are a rich source of information for different fields of expertise and knowledge. 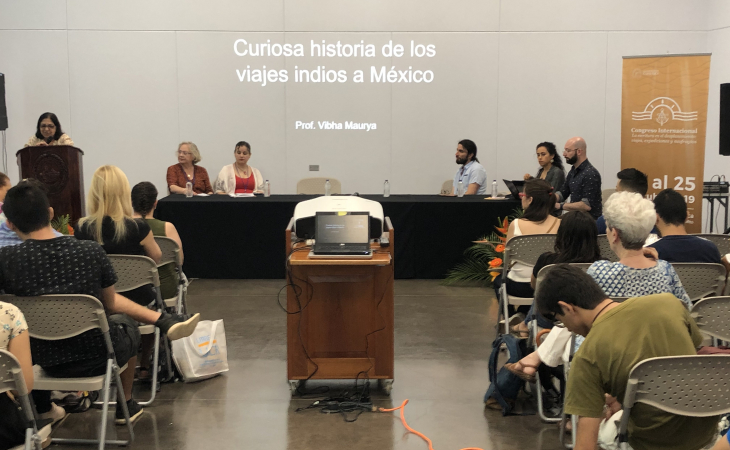 At the Thematic table 10: "Travelers, worlds and writing," Dr. Vibha Maurya of the University of Delhi, India, presented "The curious story of the travels of two Indian revolutionaries to Mexico and their later life."

They attended the “International Congress: Writing in Displacement: Travel, Expeditions and Shipwrecks”, which was held on October, 21 - 25 at the National Library and at the UCR Golfito Campus, convened by the Humboldt Chair of the Vice-Rector for Research.

National and foreign guests shared the results of their research framed in the general field of Hispanicism, from the perspective of different fields such as linguistics, literature, history, theater, art, cinema or cultural studies.

Congress was a space for specialists, researchers, and students from various disciplines to reflect on the possibilities of approximation offered by historical texts and documents on travel.

On this, the organizers affirm that “writing about displacements offers  cartography and  geography that complements the trip and offers a different image of the space and what surrounds it. The spatial displacement, in turn, implies a metaphorical operation and it is in the writing itself that this image is embodied.”

The Congress started on Monday, October 21 at the National Library, with the inaugural conference: "Making accounts in the middle of the storm: failed trips and economic wrecks in Spanish-American literature", by Dr. Agniezska Komorowska, researcher at the University of Mannheim, in Germany, which was presented by Dr. Leonardo Sancho-Dobles, Humboldt 2019 Professor.  (SEE PROGRAM).

Then, the thematic table 1 was held: “Imaginary and Imagined Spaces: Trips and Expeditions”, moderated by Dr. Sancho and with panelists from UCR.

In the afternoon, the thematic table 2 was held: “Metaphors and Travel Representations”, moderated by the UCR researcher, Shirley Longan, with panelists from the UCR, the Autonomous University of Chiapas, Mexico and the Technological Institute of Costa Rica (ITCR).

At 5 pm, first day sessions concluded with the inauguration of the exhibition: “Imaginary and imagined spaces: trips and expeditions” and the closing conference: “Travelers and pilgrims in the Works of Calderón de la Barca” by Dr. Ignacio Arellano, member of the Grupo Investigación Siglo de Oro (GRISO) [Golden Age Research Group] of the University of Navarra, Spain.

On Tuesday, October 22, the Congress continued with the forum: "Chronicles of the Archeology of the Past" with the participation of students from the School of Humanities of the UCR and moderated by Joaquín Zuleta of the Universidad de Los Andes, Chile.

Subsequently, thematic table 3 was developed: “Metaphors and Representations of Shipwrecks and Trips”, moderated by Ivannia Barboza, a researcher at UCR; and thematic table 4: “Transdisciplinary Spaces and Knowledge” moderated by Robert Lauer of the University of Oklahoma, United States.

Then UCR researcher, M.Sc. Carlos Cortés gave the talk "The Poetics of the Chronicle in Spanish-American Literature."

That day, the last thematic table 5 was titled “Traveling Experiences of Elite Women: journals, letters, texts (XVI-XX centuries)”, moderated by Sarissa Carneiro of the Pontifical Catholic University of Chile, with panelists from the Spanish universities of Huelva, Pablo de Olavide of Seville and the  Autonomous University of Mexico (UNAM).

This second day, the closing conference was given by Dr. Trinidad Barrera of the University of Seville, Spain, entitled: "The Adverse Fortune in the Trip of Cabeza de Vaca through Northern Lands."

On Wednesday, October 23, the thematic table 6 began: “Travel and Creative Metaphors”, with the moderation of the UCR researcher, Angela Ramirez and the participation of independent panelists from our country and Colombia. 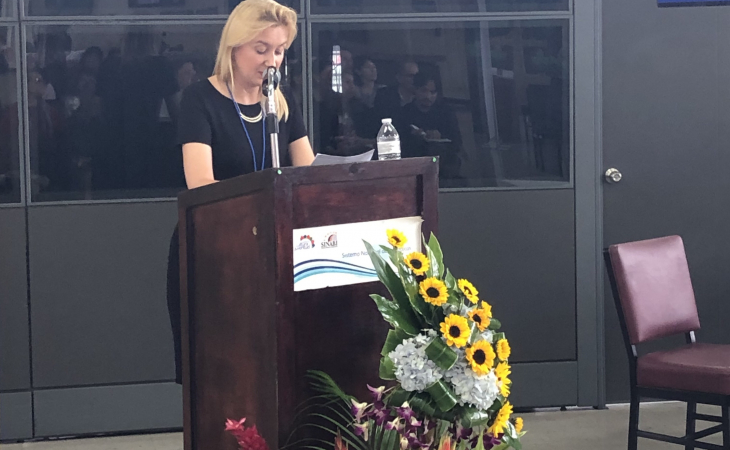 Dr. Agniezska Komorowska, from the University of Mannheim, Germany, delivered the inaugural lecture: "Making Accounts in the Midst of the Storm: failed Trips and Economic Wrecks in Spanish-American Literature".

At noon on Wednesday, the “International Congress: Writing in Displacement: Travel, Expeditions, and Shipwrecks” venue  moved to Golfito Campus of the University of Costa Rica, where the participants made a tour to “Punta de Lagartos” in the afternoon and at night, they attended a cultural activity.

On Thursday, October 24, the Congress continued at the Cultural Center of the Golfito Campus with the thematic table 7: “Transdisciplinary Spaces and Knowledge”, moderated by Agnieszka Komorowska with the presentation of researchers from UNAM, UCR, and from Bielefeld University, Germany.

Then again at the Cultural Center, the thematic table 9 took place: “Cuban Metaphors” moderated by Trinidad Barrera, a researcher at the University of Seville, Spain, with the participation of panelists from the UCR, and Ave María University, (USA).

Again in classroom 7 the thematic table 10 was held: "Travelers, Worlds and Writing", moderated by Randall Jiménez of the UCR, with the participation of researchers from the University of Delhi, India, and Universidad Iberoamericana, Mexico.

Then, at the Cultural Center, the conference: “The experience of displacement and its imprint on the genre of the travel story”, was lectured by Dr. Luis Alburquerque of the CSIC, Spain.

The last day of the International Congress, Friday, October 25, began with the thematic table 13: “Metaphors of Introspective Trips”, under the moderation of Baruc Chavarría of the UCR, with the participation of panelists from the National University of San Marcos, Peru, and from the UCR.

In classroom 2, the thematic table 14 was held: "Literary and Imaginary Geographies", moderated by Jáirol Núñez, a researcher at the UCR. Researchers from the Universidad de Los Andes, Chile, the Federal University of Maranhão, Brazil, and Stony Brook University, USA participated.

The closing conference "Narrating Misfortune: Misfortune and Virtues in Chronicles of Colonial America", was given by Dr. Sarissa Carneiro, a researcher at the Pontifical Catholic University of Chile.

Finally, to close the Congress, an expedition was made to Golfito, Golfo Dulce, and Cacao Beach; and on Saturday, October 26, the return to San José was organized to include a visit to Finca 6 Museum Site in Palmar Sur de Osa, Puntarenas.

The activity was organized by the Humboldt 2019 Chair of the Vice-Rectory of Research, together with the South Pacific Humanities Thematic Chair of the Golfito Campus.

In addition, the Congress was sponsored by the Embassy of the Federal Republic of Germany, the Foundation of the University of Costa Rica (UCR Foundation), the Office of International Affairs and External Cooperation (OAICE) of the UCR, and the Vice-Rector of Research of this university. 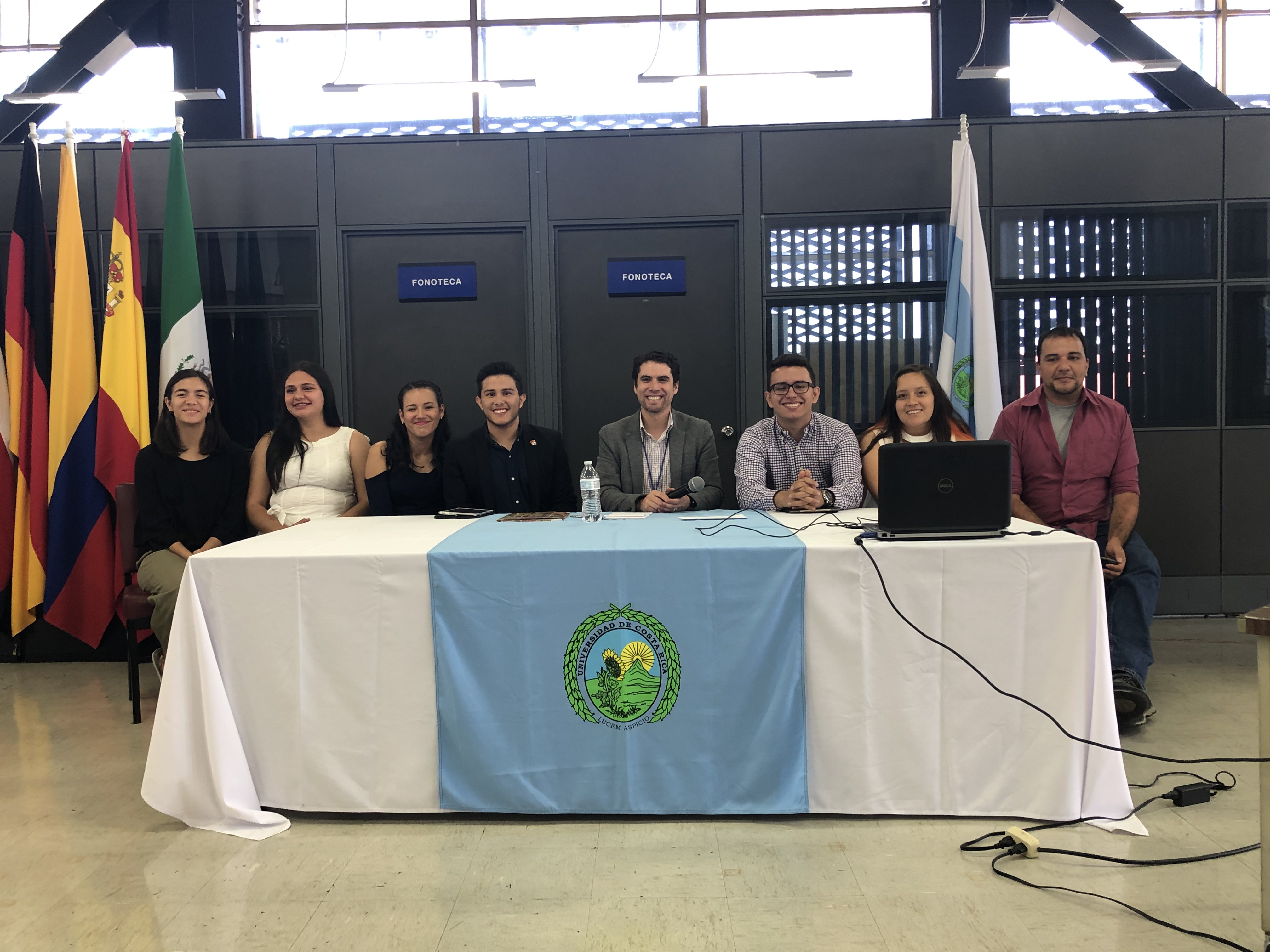 On Tuesday, October 22, the Congress began with the forum: “Chronicles of the Archeology of the Past” with the participation of students from UCR School of Humanities.