UCR Will Have Its Own Radio Telescope to Explore the Cosmos

A research project is studying how to convert a gigantic antenna that was originally used to monitor a satellite, into a radio telescope that will help to study the stars. 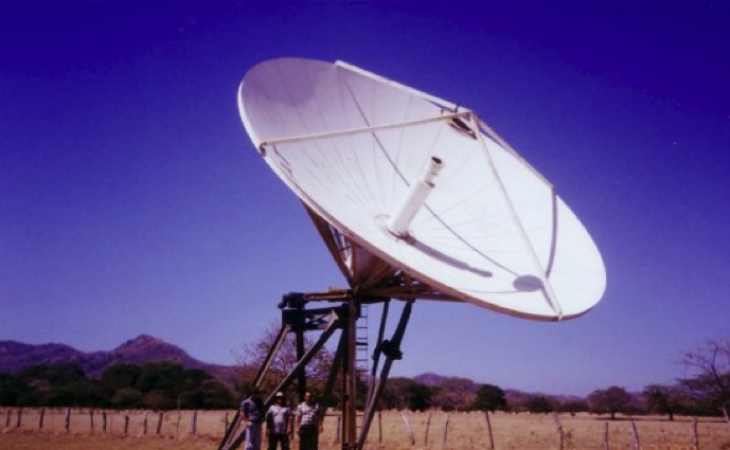 The antenna is located at the UCR Experimental Farm of Santa Cruz (FESC), and it is administered by the University seat in Guanacaste.  The project is called “Radio Telescope at the Radio Observatory of Santa Cruz (ROSAC).”

Radio astronomy is the study of celestial objects, stellar objects and the universe in general. The goal is to measure the emission of waves of electromagnetic radiation that celestial bodies emit in the radio region of the spectrum.

Thus, with the help of a radio telescope, astronomers can observe the radio spectrum of a region in the sky.

Radio waves have a wavelength greater than that of light. In order to receive good signals in radio astronomy, large antennas or groups of smaller antennas operating in parallel must be used.

Most radio telescopes use a satellite dish to amplify the waves and thus obtain a good reading of them and that is what we want to do with the antenna located at FESC.

Eye to the Sky

As explained by the main researcher of the project, Dr. Carolina Salas-Matamoros, from the Center for Space Research (CINESPA), “that antenna is fixed and what we want is to design a different mount and adapt this antenna for astronomical use, allowing a wider antenna movement for astronomical tracking and able to point to different celestial bodies in the sky.”

The specialist added that there are two main objectives: “a structural one: the design of the mount, which is the first that we are going to do it in the country, and the second one is the scientific objective of the project: to create an online database with those data that we are going to collect in radio waves with the antenna. This is going to help us contribute to the global database.”

Dr. Salas pointed out that one of the advantages of the radio telescope is that radio waves are transparent to the earth's atmosphere, so they are not climate-dependent, nor is there the possibility that the atmosphere will attenuate the radiation that arrives at these frequencies.

Therefore, the radio telescope “allows a fairly large coverage and this data can be used by any scientist at a national or international level. It also facilitates the completion of research projects,” said the expert.

The creation of the radio telescope is carried out by CINESPA in conjunction with the UCR Mechanical and Electrical Engineering Schools. It also has the collaboration of the National Astrophysics, Optics and Electronics Institute of Mexico (INAOE).

Because of its location, the Experimental Farm of Santa Cruz (FESC), located in the Limón district of that canton, is an ideal place to observe the sky and the atmosphere.

Among its advantages it stands out that the place is almost at sea level, but far enough from the coast. It has an elevation of only 49 meters above sea level. Then, the atmospheric layer is quite large, and the sky is very open, because Limón de Santa Cruz has few mountains around it.

For that reason, UCR already has several systems of instruments at the FESC that monitor our atmosphere and the sky, among them a meteoradar and a wind profiler.

These last two projects were promoted by Dr. Marcial Garbanzo-Salas, researcher at the UCR School of Physics, in collaboration with Dr. Walter Fernández-Rojas from UCR and Dr. Wayne Hocking from UCR and the University of Western Ontario (WATCH  VIDEO).

The FESC already has a meteoradar that was financed thanks to an agreement signed between UCR and the University of Western Ontario, in Canada. UCR is responsible for providing the land where it was installed plus maintenance, electricity and security services.

In addition to recording data on the number of meteors, this modern radar obtains important information about the atmosphere between 80 and 100 km of altitude using the path of plasma generated by meteors when entering the planet as a tracer.

It also facilitates the generation of sky maps that describe, through which sector, the largest number of meteors or star showers enter in a day.

This meteoradar is the only one in the American continent that monitors the equatorial area of the planet and analyzes the atmosphere, winds, and temperature.

The data are instantaneous, since the information collected is processed every ten seconds and reflects the situation in real time, while allowing the variations to be compared over a period of time.

The meteoradar was created thanks to the initiative of Dr. Garbanzo, who has a Master's Degree in Atmospheric Sciences and a Ph.D. in Physics from the University of Western Ontario.

For his doctoral thesis, the specialist developed the research project named "Implementation of a meteoradar to determine the concentration of meteors that impact the atmosphere upon Costa Rica and to deduce the temperature and winds in the high mesosphere and low thermosphere.”

Dr. Garbanzo also encouraged the creation of a wind profiler at FESC.

This technology consists of modern equipment installed by UCR to monitor air currents. It is a radar called "wind profiler", which provides a vertical profile of air currents at different altitudes, caused by the immediate effect of the sun on the atmosphere.

The profiler is very useful for scientific research, but also for climatological measurements.

For example, it has practical applications for the safety of commercial flights, since pilots can be warned about the altitude they could find a turbulent layer, which is important when crossing this region.

The radar not only measures the wind speed, but also generates maps of wind movements, which are very useful for wind monitoring. The profiler can be used in postgraduate thesis research or other types of climate research, for example in numerical weather prediction (NWP). 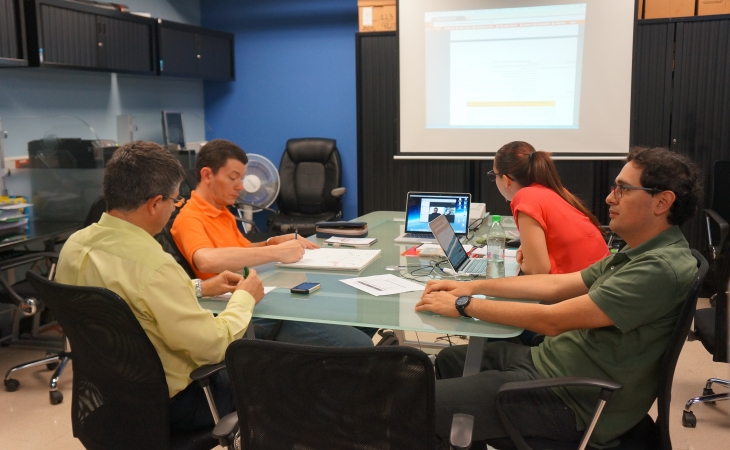