More than one hundred people representing public institutions, universities, private companies and tomato producers met to analyze possible strategies to control the "Spoon virus" in tomato plantations in the country. 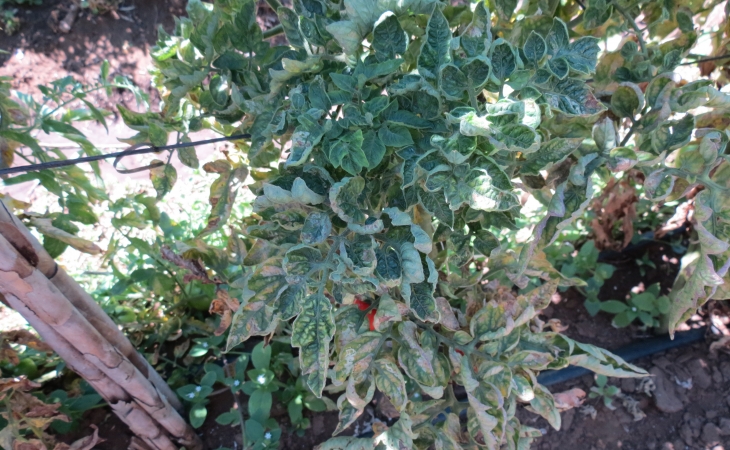 The "Spoon virus" causes the tomato plants (Solanum lycopersicum) to turn yellow, the leaves are curved inwards (spoon-like) and the production is partially or totally reduced, causing important economic losses to producers.

The Tomato Yellow Leaf Curl Virus (TYLCV), transmitted by the whitefly (Bemisia tabaci), is present in several countries of the world, and for some years now also in Costa Rica.

In our country, the virus was first identified in 2012 in a tomato plantation in Grecia, Alajuela, by a group of researchers from the University of Costa Rica led by M.Sc. Natalia Barboza-Vargas, from the Center for Research in Cellular and Molecular Biology (CIBCM).

This disease, popularly known as the "Spoon Virus", is already found in different parts of the Central Valley and the western region of the country, as verified by the researchers from UCR.

Since the discovery of the disease, the UCR and other institutions have led different research initiatives and meetings with state representatives and the national tomato sector to alert on the "Spoon Virus" and generate synergies to face the situation.

As part of these efforts, on Tuesday, May 9, 2017, the conference "Strategies for control of viruses transmitted by whitefly in tomato" was conducted by Dr. Enrique Moriones-Alonso, research professor and Director of the Institute for Subtropical and Mediterranean Horticulture "La Mayora", associated with the Higher Council for Scientific Research (IHSM-CSIC) -Univ. Malaga, Spain, invited by the Office of International Affairs and External Cooperation (OAICE) of the University of Costa Rica.

The activity was carried out at the Tacares de Grecia Campus of the Western Regional Seat of the University and it was sponsored by the Federated Agronomists Association of Costa Rica, the National Program of Protected Environments (ProNAP), and the Foundation for the Promotion of Research and Transfer of Agricultural Technology (FITTACORI).

Dr. Moriones is one of the most recognized world experts in this field; he has more than two decades of experience in research on horticultural diseases, especially those transmitted by the whitefly in tomato and melon.

As explained by Dr. Moriones in his presentation, the "Spoon Virus" emerged in the late eighties in different countries, especially in places with a warm climate. In Spain it was identified for the first time in 1992.

The begomoviruses, genus to which the "Spoon Virus" belongs, are characterized by being transmitted by the whitefly and they affect crops such as cucumber, melon, and tomato.

The expert gave an account of the strategies used in some regions of Spain to combat the disease, starting with the use of insecticides, crop management in protected environments and outdoors, introduction of resistance in plants and others.

As Dr. Moriones explained, a series of strategies can be used to combat the disease. One of the options he presented was the use of plastics that block ultraviolet light and help the dispersion of the whitefly.

He also showed results where the tomato plants were treated with a product similar to salicylic acid, which allowed the activation of the crop defense mechanisms; all this starting from disease- free seedlings.

Thanks to this method, a significant reduction in whitefly populations was achieved, a smaller amount of insecticides was needed (with the consequent benefit for the environment), and a significant increase in production was achieved.

However, this has not been an easy task, since viruses have a great capacity to mix, adapt and produce children different to their parents (recombinants), as well as attack crops simultaneously (presence of several types of viruses).

He said that in many cases the symptoms produced by the "Spoon virus" or tomato yellow leaf curl disease in plants, are produced by at least eight different viruses and their behavior with respect to resistance varies greatly.

In fact, the methods used to combat the first spoon viruses did not work for the variants that emerged afterwards, forcing researchers, plant breeders as well as producers to start over the whole process to deal with the disease. 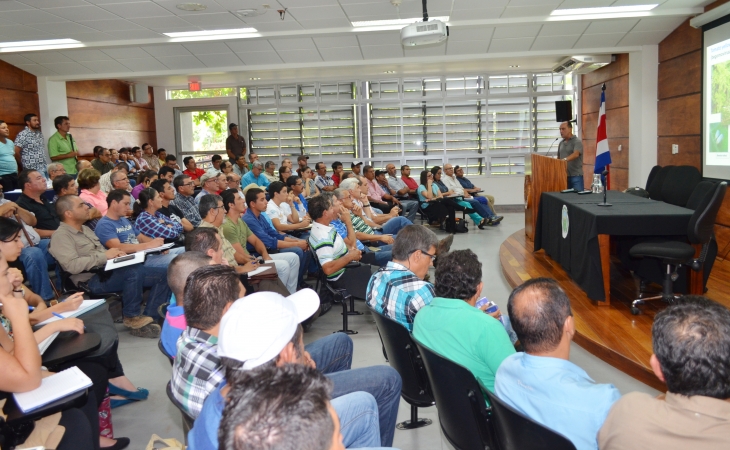 Dr. Enrique Moriones-Alonso, a Spanish expert on diseases transmitted by whitefly, gave a lecture on the subject at the Tacares de Grecia Venue of the Western Regional UCR Seat.

Spanish researchers have used two different strategies that seem to have given good results. One is the use of varieties with resistance genes (known as Ty genes) that have been isolated from wild relatives of tomatoes. And through conventional improved breeding they have crossed with commercial tomato varieties.

The other is resistance to the vector (the whitefly). This was achieved by crossing wild tomato plants (found in Peru), which have structures called "glandular trichomes".

"Varieties that have 'glandular trichomes' cause white flies to reproduce in smaller quantities.  In addition, these structures, located under the leaves, cause the fly to move to the upper part, which makes them more vulnerable to predators.

“This also helps to reduce the population of the whitefly, especially if work is done with biological control, using insects that eat the whitefly can help even more,” said the researcher.

Engineer Carlos Echandi-Gurdián, breeder at the Fabio Baudrit-Moreno Experimental Station (EEFBM) who directed the project that led to the release of a hybrid tomato called "Prodigy", said that he considers the use of the methodology developed by the Spanish viable in our country, taking into account our climate conditions.

“We are committed to finding a way to retake the validity of the hybrid (Prodigy) by introducing resistance. I believe that the most intelligent strategy here is the morphological resistance (introducing glandular trichomes), because this will give us more sustainability over time together with an integrated management of the vectors,” he emphasized.

However, he said that this requires a greater commitment from all sectors involved and seeking the necessary funds.

“We must keep in mind that the national interest is not always the one that prevails. If the private businesses cooperate, it would be excellent, but the only way to improve is from public institutions, because they have fewer commitments,” the researcher emphasized.

For its part, M.Sc. Barboza reviewed the research carried out on the "Spoon Virus" and the actions developed by the University of Costa Rica and the State Phytosanitary Service (SFE) in recent years.

She explained that our country faces the difficulty of having two species of whitefly that transmit the "Spoon Virus" Bemisia tabaci MED, and Bemisia tabaci MEAM1. These affect tomato and sweet pepper plantations in the Central Valley of the country.

The researcher believes that it is very important to continue monitoring the populations of whitefly and to know the variants of the virus that exist in the country. “Although in Spain studies have been done on this subject, we have to generate our own investigations”, she added.

“We already know that we have bipartite begomoviruses, but we do not know what can happen before the arrival of TYLCV-IL (Israeli variant). It may be that the Israeli strain displaces the bipartite variants.

“That is why it is necessary to continue sampling and analysis of plant material in the field.  Currently, tomato varieties that have resistance genes are already being used, but if the inoculum pressure in the field is very high, this resistance can be ‘broken’,” added the UCR researcher.

The expert believes that this is a permanent job and for this, farmers collaboration is essential, as they are the ones who are near the crops on a daily bases and can identify infected plants more quickly.

She agreed with Mr. Echandi that the UCR does not always have enough resources to pay for analyzes; therefore the collaboration of producers and private enterprise is required. 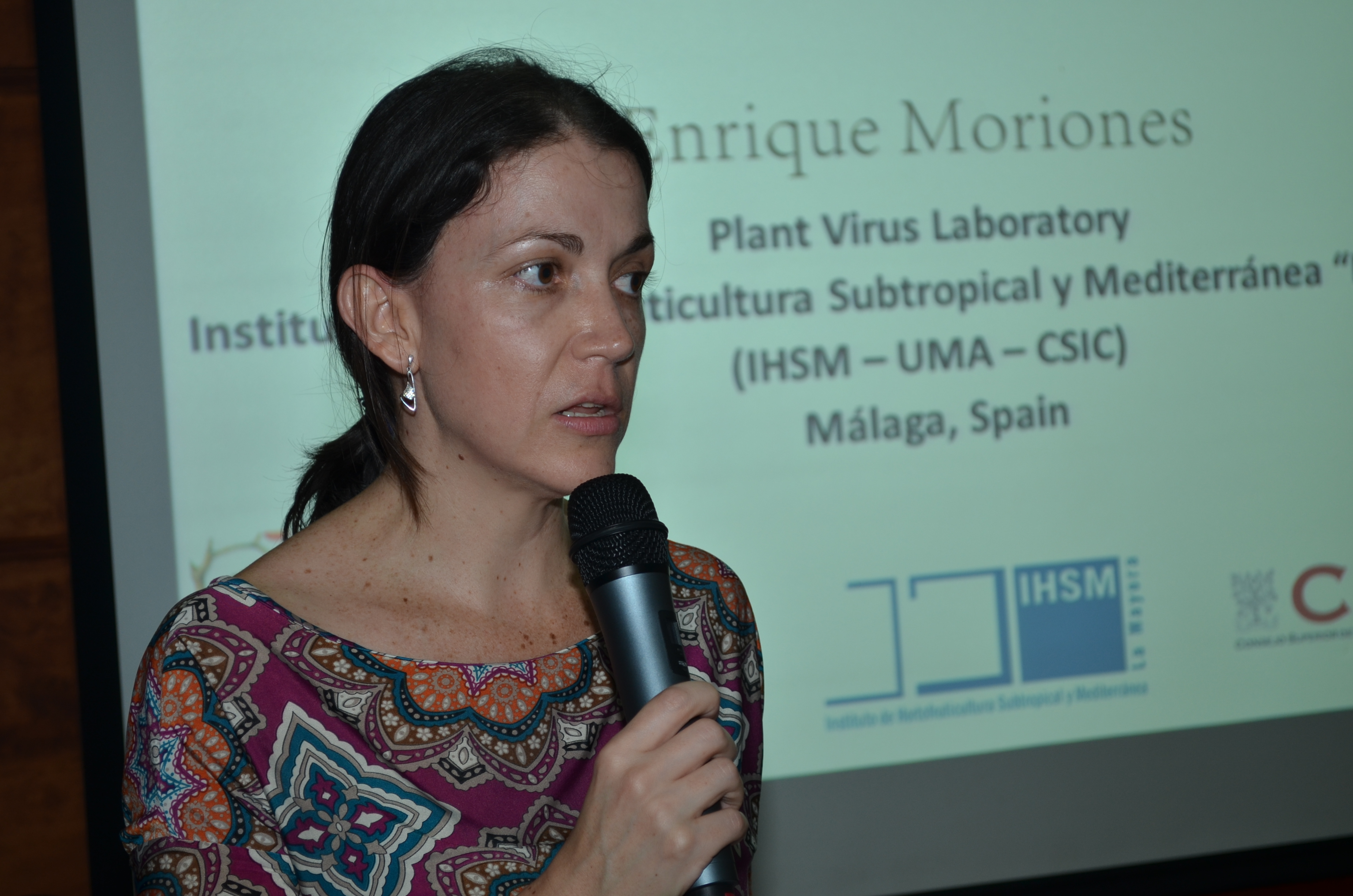 M.Sc. Natalia Barboza-Vargas, professor at the School of Food Technology (ETA), researcher at the Center for Research in Cellular and Molecular Biology (CIBCM) and the National Center for Food Science and Technology (CITA) led a team of researchers who first identified the "Spoon Virus" in 2012 in a tomato plantation in Grecia, Alajuela, Costa Rica.